Smoky Coal Ban to be extended to 13 new areas

Smoky Coal Ban to be extended to 13 new areas

All towns with population over 10,000 covered by ban

The Minister for Communications, Climate Action and Environment Eamon Ryan T.D. has signed Regulations to give legal effect to the extension of the smoky coal ban to all towns with populations over 10,000 people.

From 1 September 2020, the burning, sale and marketing of smoky coal will be prohibited in thirteen additional areas across the country.

"I am very pleased to extend this ban to a further 13 urban areas and I would like to I thank the local authorities for their cooperation.

This measure will reduce air pollution and promote public health. The main health effects of air pollution include stroke, heart disease, lung cancer, and both chronic and acute respiratory diseases, including asthma. Fine particulate matter, the pollutant of most concern from domestic solid fuel burning is linked to a range of diseases. Banning smoky coal saves lives and improves health outcomes”.

The geographical boundaries of the new Low Smoke Zones have been defined following extensive liaison with the relevant Local Authorities. An interactive online map, to illustrate both the existing Low Smoke Zones and the new ones that will be in effect from 1 September 2020, is now available. The map includes an Eircode search facility, whereby a user can enter the Eircode of any particular premises, to see whether or not it falls within a Low Smoke Zone.

1. Local Authority staff may undertake inspections of premises and vehicles being used for the sale and distribution of solid fuel as well as collect samples;

2. a Local Authority may bring a prosecution under the Air Pollution Act for breaches of the Regulations

3. a Local Authority may issue a Fixed Payment Notice (or 'on the spot fine') for alleged offences relating to the marketing, sale and distribution of prohibited fuels in Low Smoke Zones (LSZs), with a penalty range of €250 to €1000.

As part of the Programme for Government, the Department has also committed to developing further a multi-agency enforcement approach and we will be working with the Local Authorities and other relevant stakeholders in this context over the coming months.

People have to heat their homes and concern is sometimes expressed about the impact of a widening of the smoky fuel ban on lower income households who cannot afford to upgrade their heating systems. The SEAI published a Domestic Fuels Comparison of Energy Costs (April 2020) report which indicated the following cost to unit of energy values for a range of solid fuels (as sold in bales for briquettes and bags for coal and ovoids (which are manufactured blends of fuel) : 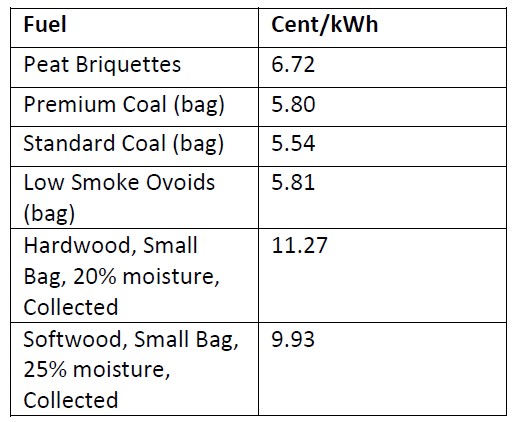 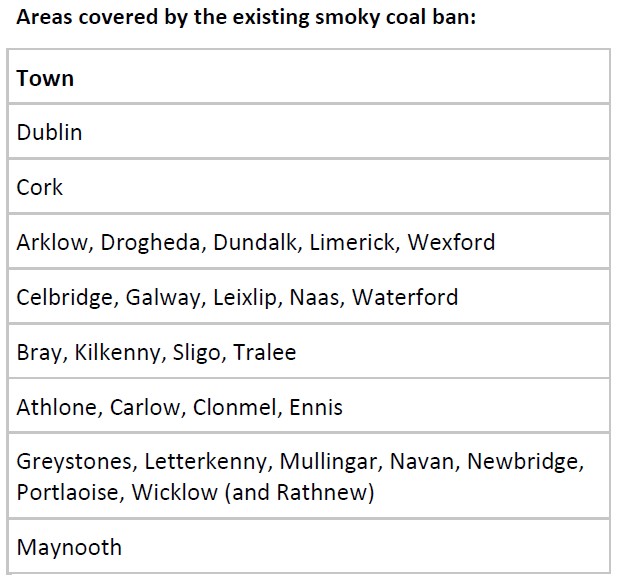 Health Impacts of Solid Fuel Use The European Environment Agency Report Air Quality in Europe 2019, indicates that in 2016 there were 1,180 premature mortalities arising from air pollution in Ireland. The vast majority of these, 1,100, are attributable to fine particulate matter (PM2.5), which in Ireland is primarily associated with domestic solid fuel burning.

The same report indicates 12,000 Years of Life Lost, indicating significantly earlier mortality for those deaths. Research indicates that the introduction of the ban in Dublin has resulted in approximately 350 fewer mortalities per year, reducing cardiovascular, cerebrovascular, and respiratory mortality in the general population.