County Meath is known as the Royal County as it was once the territory of the High Kings of Ireland. The abundance of historic monuments within the present day boundaries testifies to the ancient importance of the region.

Some of the most important historic sites and monuments are located within County Meath and virtually every important aspect of Irish history from prehistoric times is associated with the county.

The rich landscape of pasture land watered by the scenic rivers of the Boyne, Blackwater and their tributaries results in Meath being a prosperous agricultural county with some of the best land in Ireland. It is particularly noted for its fine horses and cattle.

The two main rivers in the county, the Boyne and the Blackwater join at Navan, which stretches to the Irish Sea, is the most historic waterway in Ireland. The rich legend of the Boyne with Fionn MacCumhall and the Salmon of Knowledge is still told today. The waterways are rich in aquatic life and the salmon and trout are recognised as among the finest in Ireland.

On the upper stretches of the Boyne, at Trim, is the greatest of the Anglo-Norman castles in the country, while near the Blackwater at Kells, are the ruins of the 9th century monastery founded by the monks from Iona in Scotland. About that time, the illuminated master manuscript, the Book of Kells was completed.

The Boyne Valley is probably one of the most interesting areas in Ireland to visit. The massive megalithic tombs and passage graves at Newgrange, Dowth, Knowth and Loughcrew, the Royal site at the Hill of Tara, Tailteann, the site of the Great Aonach which continued tri-annually for over 3,000 years, monastic houses at Trim and Bective, 16th and 17th great houses, are all vivid reminders of a glorious past. 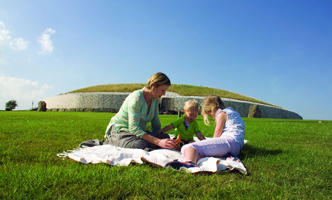 For the Irish scholar or people wishing to learn the Irish language , facilities are available at the flourishing Gaeltacht at Rath Cairn where many natives and visitors holiday and study, often returning year after year. Traditional music and dance, Comhaltas Ceoltóirí Eireann, is available throughout the County with one of the most popular locations being Oldcastle. 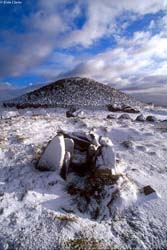 As a sporting location, the county has a great deal to offer. National Hunt and Flat racing is regularly held at Fairyhouse ( home of the Irish Grand National) and Bellewstown ( for over 300yrs). Laytown is a unique event where the horses race on the beach. Proudstown Park in Navan is one of the finest possible tests for National Hunt horses, with an uphill finish similar to Cheltenham. There are many facilities for equestrian sport throughout the county and stag and fox-hunting is possible with several of the hunt clubs.

From the historical Tara Hill and Newgrange, to the fun packed coast to the tranquil gardens and Boyne walks Meath offers something to satisfy all interests.