Starting at Tara and finishing at the Battle of the Boyne Site, this trail has been devised to allow easy access to some of the best heritage sites in the county.

The route allows visitors the option of completing the trail on one continuous journey or with planned over night stops to savour the delights of Meath in the towns on route.

Travelling from Dublin City, take the N3 towards Navan, past Dunshaughlin. Tara is signposted to the left off this road. Alternate routes from Dublin include the N2 to Slane, on to the N51 to Navan and the N3 to Tara, or take the N4 to Enfield, on to the R159 to Trim and continue through Kilmessan.

If you have time at your disposal, take the N1 Coastal Route to Meath. Divert to the R150 to Laytown and Bettystown, on through Mornington to Drogheda and on through Slane and Navan.

From the North, take the M1/N1 to Drogheda or the N2 to Slane and on to Navan.

From the North West, take the N3 through Cavan, Kells and Navan.

From the West, take the N4 or the N6 to Kinnead and continue through Trim.

While this trail follows a defined route starting in Tara, you may start your trail at any point and plan your route to suit your own itinerary.

At the Hill of Tara, Irish myth, legend and history are one - this magical site has been home to gods and goddesses, to druids and warriors, and to Ireland’s High Kings. Tara is imbued with a magical, mythical atmosphere. It is the stuff of legends, the home of gods and heroes, not mere mortals.
The Hill of Tara has a strange effect on people. From up here on the heights one sees not only into the distance, but into Tara’s past. Tara has more than its share of heady stories to tell - tales of intoxicating drinks, chariot-driving High Kings and old hags who transformed themselves into beautiful women.

Listen out for the Lia Fail (The stone of destiny) - singing stones which announce the presence of future kings.

The past is visibly engraved in the undulating landscape at Tara where the hillside is marked by ancient earthworks, mound formations and the ruins of royal enclosures.

Location
15 mins from Navan off the N3

Beacons in the Dark

The  medieval world of monks and abbeys brings to mind an ascetic life of isolation, prayer and scholarly study. This tells only part of the story. Irish monasteries were often thriving and highly sought out enclaves of cultural creativity, quite literally beacons in the dark, responsible for preserving and passing on precious texts and for the creation of some of the world’s most imaginative and fanciful Christian art.

This is the stuff movies are made of. It’s no wonder that the makers of the movie ‘Braveheart’ chose Trim in County Meath as the shooting location for their epic thriller. One look at Trim Castle’s stony outline against a dramatic Irish sky and storybook images of valiant warriors and timid monks spring to life.

In Medieval times, Trim Castle stood like an imposing stone sentinel and powerful symbol of norman strength at the edge of the Pale, the small area of Anglo-Norman influence on Ireland’s eastern coast. To go beyond the Pale was to enter the hostile world of the Gaelic Irish. Here at the edge, the two sides would have met - in conflict and in battle.

Trim Castle
Built by Hugh de Lacy in 1173, this is the largest Anglo-Norman castle in Ireland.

Open
April to October.  Admission charge- Guided tours only. Open at 10am  7 days a week.

The Medieval Town of Yellow Ford

Athboy (Town of the Yellow Ford) is a medieval town with some of its original wall still intact. The Church of Ireland boasts an interesting medieval table tomb. Two miles from Athboy is the Hill of Ward - an Iron Age Fort which was once seat of the High Kings and a meeting place for the Celtic Festival of ‘Samhain’ held on 1st November, heralding the start of Winter. The last recorded celebration was 1168. Click here for the Athboy Heritage Trail

Rathcairn
The village of Rathcairn is home to a lively Gaelic speaking community, where visitors interested in Irish language, music and song will find much enjoyment.

Hill of Ward
2 miles outside Athboy

The Monastic World of Saints and Scholars

Kells or Ceanannas Mór, meaning Great Fort, a designated Irish Heritage Town, is one of the finest examples of a monastic settlement. Retracing the footsteps of the monks, one is drawn into a story of survival, of pluck and wit pitted against brawn and belligerence. Medieval monks were certainly pious, some reclusive, but most led colourful and imaginative lives. It was a question of survival in troubled times, of escaping the raids of plundering Vikings and keeping the flame of knowledge and culture alive in an age of darkness.

Columcille’s name became associated with Kells after the brethren of the Iona monastery moved there to seek refuge from the hit-and-run attacks of the Vikings.

The Kells Town Hall and Tourist information Point now houses a facsimile of The Book of Kells. While the original is on display at Trinity College Dublin, this book represents one of a very small number of copies ever made of this famous manuscript. The Crozier is on display in addition to a number of panels and an audio visual information on Kells Town. You can also commence the Kells Historic Trail from outside the Town Hall whereby a map can be obtained (weekdays). Further facsimiles of the Book of Kells can be can be viewed at the Headfort Arms Hotel lobby and also in the Church of Ireland.“Golden Age” - AV presentation. Exhibition of stone and metal work plus a facsimile of the Book of  Kells.

Life, Death, and the Hereafter

Not all inhabitants of Loughcrew rest peacefully in the ancient soil of the area. St Oliver Plunkett, a heroic 17th century archbishop who was born in the area, was convicted of treason and hanged, drawn and quartered in the Tower of London after refusing to submit to the fiercely anti-Catholic laws of his time.

The passage tomb at Loughcrew: magnificent, mighty and virtually unknown. This massive prehistoric mound is nothing less than the Irish equivalent of Egypt’s pyramids; both witnessed the passage of the dead from this world to the next. As with the pyramids, Loughcrew continues to perplex and amaze; the burial complex in Meath possibly more so - it predates its desert cousins by 2000 years.

Loughcrew
Loughcrew, possibly the oldest cemetery in the world, tells of Ireland’s neolithic cultures, shrouded in myth and mystery. One legend has it that the so-called burial mounds were created by a witches flying overhead and dropping pebbles on the landscape. Sounds hard to believe but who’s to say otherwise? The tombs are located on three different hills. The largest of the three Cairn T has a vernal and Autumunal Equinox which is when the chamber becomes illuminated with sunlight. 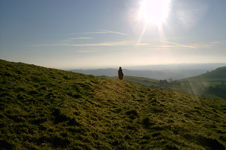 Location
East of Oldcastle off the R163

Symbolically etched in the ruins of Meath’s castles are stories of lords and ladies, of battles and struggles, of power and glory. The draughty walls of these stony fortresses provided their Norman Lords with an important stronghold in a then hostile land. They were a place of refuge in times of danger and a strategic base from which to attack, conquer and rule. Today, these draughty old symbols of Norman military and political strength lend the Meath countryside an air of romantic fantasy.

Dunmoe Castle
Two facades of this stone giant survive to stand guard over the passing Boyne.

Location
10 mins from Navan, off the N51

Other Attractions
Athlumney Castle Built near the site of an earlier motte and bailey structure. 5 mins from Navan. Access by permission only.

Hill of Slane
Home to 15th century Slane Abbey. St. Patrick lit his Pascal Fire on the Hill of Slane, in direct opposition to the pagan beliefs of the High King.

Location
Just outside Slane off the N2

Other Attractions
Slane Castle
Open from May-mid August. Access by guided tour only.

The visual artistry of Ireland’s ancient civilisations remains to this day strikingly fresh and modern. Knowth’s two burial chambers boast the richest and largest collection of megalithic art in Europe. Whorls and diamonds, lines and dots are gathered together into compositions of startling sophistication. Looking at these images with modern eyes one is struck by their surprisingly abstract decorative beauty. And when seen with the eyes of the ancients in the world of the passage tomb? Are they maps of the heavens, tracking the soul’s lost loved ones? Quite possibly.

Brú na Bóinne
The spectacular passage grave at Newgrange is the jewel in the crown of Brú na Bóinne. Although the site house over 50 monuments and earthworks, only Newgrange and Knowth are open to the public. Dowth is currently undergoing excavation. For more info click here

Location
2km west of Donore Village on the L21

Open
Newgrange - All year except December 24th-27th
Knowth- May - October
Admission charge
Access to passage graves from Brú na Bóinne Visitor Centre only. Note that this site is extremely busy during summer months and access to the monuments may not be guaranteed.
Pre booking is advisable. The Sat Nav Coodinates for the Bru na Boinne Visitor Centre are Latitude 53.694567 and Longitude -6.4463.

Looking at the site one wouldn’t expect that the Battle of the Boyne, in 1690, could have such a lasting and central impact on people’s lives. 300 years after the battle, passions in Ireland still run high when the subject of James II’s defeat by William of Orange comes up. It’s not so much the battle as what it stands for - continuing differences between Catholics and Protestants - and the difficulty of overcoming memories of the past in search of a common future.

Battle of the Boyne Site
Where William of Orange defeated James II in 1690.

Location
Location On the south bank of the Boyne, 3km north of Donore Village off the L21. The site is signposted off the N51 (Slane Drogheda Road, access for cars only this route is not suitable for coaches), off N1 (Drogheda) and off N2 (Slane-Ashbourne)

1st May –30th September , Guided tours and self guiding walks. 10am – 5.15pm everyday.Rest of year open to group bookings made in advance.