County Meath - Proud  to have hosted The 2011 Solheim Cup

For one unforgettable week in September, the eyes of the golfing world were on County Meath as The 2011 Solheim Cup was staged at the stunning Jack Nicklaus designed Killeen Castle golf course.

And for a county that has been welcoming visitors for over 2,000 years to its iconic World Heritage sites, it is only fitting that County Meath now joins the ranks of Europe’s top golf destinations after the spectacular success in hosting the greatest female golf event in the world.

The week was capped with Europe dramatically winning their first Solheim Cup since 2003 by staging a sensational 15-13 victory over the much fancied USA.
Players, tournament organisers and spectators battled against heavy rain on the final day and despite play being suspended on a number of occasions a huge final day crowd of over 28,000 were treated to some spectacular golf. 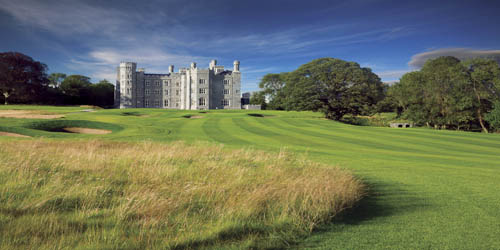 The tournament provided an excellent opportunity for Meath & Ireland to showcase itself to the world, providing a welcome boost to the tourism industry which is expected to generate over €30 million for the economy. The staging in Killeen Castle of the most prestigious team event in the professional ladies game also provided a unique chance for spectators to see the best golfers from Europe and the USA, and the crowds came in their droves with in excess of 80,000 attending the event over the course of the six days.

Head of Golf Tourism at Fáilte Ireland, Keith McCormack, commented; “This has been a fantastic week and a great achievement for Ireland to stage such a successful high profile international event. To achieve over 80,000 attendees over the course of the week is a huge feat and Ireland & the Boyne Valley region being showcased in spectacular fashion to an enormous global audience; providing a great tourism boost both in the short and longer term”.

Both sides battled extremely hard in a close competition which ebbed and flowed throughout the weekend. With the matches tied at 8-8 going into the final day, some great European performances in the singles, including a spectacular 6&5 win from Scotland’s Catriona Matthew in the first pairing against form American player Paula Creamer, which gave Europe the momentum. Victory was then sealed as Spain’s Azahara Munoz went one-up heading up the stunning 18th at Killeen Castle.

Solheim Cup Director from the Ladies European Tour, Mark Casey commented; “The victory is a great result for European golf and highlights just how strong our European players are to regain The Solheim Cup from such a high-ranked American team. The matches were played in a great spirit and a truly amazing atmosphere was generated by the huge numbers of spectators that attended. Killeen Castle & County Meath provided one of the great Solheim Cup venues and we look forward to returning to this fabulous course for the Ladies Irish Open next year.”

Meath & The 2011 Solheim Cup is being mentioned around the world:

"The outcome hinged on the last three matches and they all swung in favour of Alison Nicholas’s European girls. Spaniard Azahara Munoz clinched the vital point on the final match with a one-hole win over Angela ­Stanford."

"Europe won the Solheim Cup for the first time since 2003 on Sunday, finishing powerfully to beat the United States, 15-13, at Killeen Castle in Dunsany, Ireland."

"On a gripping final day at Killeen Castle in Ireland, a late surge from the home side saw them regain the trophy for the first time since 2003."

"THE VICTORY shrieks that greeted Europe’s win in the Solheim Cup at Killeen Castle in Co Meath yesterday were of operatic, glass-shattering proportions, and – a bit like the winning team – the crystal trophy, the most famed in women’s team golf, proved indestructible"