Follow us along the Moynalty heritage trail and experience first-hand the traditions and history which make the town so special.

The Moynalty village of today has replaced a village of much humbler origins. A mud hut type of house characterised the village until 1825/6 when the Farrell Estate replanned the town according to what is considered to be a Swiss design. This type of plan called for the entire town to be built on only one side of the street hence coining the phrase "All to one side like Moynalty". It would be another hundred years before houses were built on the other side of the street.

The town's actual origins are unclear but date at least to the times of the Norman conquests of Ireland. Moynalty was considered to be a typical Norman manorial village a primarily agricultural habitation with some strategic importance and possibly a fair or market. The ancient village of Moynalty lay in a position somewhere between the the present Church of Ireland, Crochawella and Clooney¹s Field. 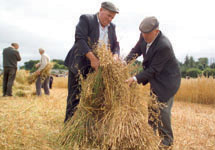 Perhaps the highlight of modern day Moynalty is the annual Steam Threshing Festival. The event, a celebration of traditional life in rural Ireland, is held on the second Sunday in August each year and attracts as many as thirty thousand visitors. All aspects of rural life can be experienced first-hand: from traditional farming methods to Irish music song and dance.

This large stone cross in the Catholic graveyard was originally situated on top of the Catholic church. It was eventually felt to be too heavy for the church roof and subsequently removed to this graveyard in 1916.

The Catholic Church was built in the early 1820s on gounds donated by the Farrell family. The Farrells also donated the stained glass window, a very high quality piece of artistic craftsmanship by a French artisan.
In 1976 an extension was added to the main aisle of the church.

Mass Stone
This stone would have been used as an altar for Masses held surreptitiously during penal times. The stone was only recently moved to the church grounds from its original location in the townland of Curraghtown. It was kindly donated to the parish by the Rowntree family.

The Donore Hoard bronze artifacts, a bronze chain, plates, and a door knocker, were discovered on this site during an excavation in 1984. The items are now housed in the National Museum.

This much admired building was once the gatelodge to the Farrell Family Estate, the focal point of which was Moynalty House. The gatelodge is said to be as Swiss in its design as the town itself. It would have been used as a gatelodge from 1825 to 1929. At that time there were two separate dwellings in the building.

The upper floor of this building was formerly the Boys Primary School. It was purpose-built with the rest of the village in 1826 and was provided rent free by the Farrell Estate. It was predominantly a two teacher school with a playground, which was located in a meadow on the opposite side of the street. The school was closed in 1938.

The west end of the building to the left was once the village blacksmith¹s forge. The proprietor was a man named Jack Reilly. The forge was vacated sometime in the 1940s and was sometime after converted into a drapier's shop by Patrick Ward, later of Garlow Cross.

Deignans Shop
This used to be the local police barracks. On the 12th of May 1920, it was burned down by Sinn Fein during what is now known as the Troubles. During this time the bridges in Moynalty, Carlanstown, and Mahonstown were also blown up. The chief officer¹s private house is still in existence in the yard area of Deignans shop.

The stone to the left is a very old milestone stating that it is 33 Irish miles to Dublin via Carlanstown.

Upper Floor
The upper floor of this building formerly housed the Girls Primary School, which, as with the Boys Primary School, was purpose- built with the rest of the village in 1826. Access to the playground and dry closet was via an overhead balcony and walkway at the rear of the building. It was vacated as a school in 1938.

Post Office
This building was the residence of the local midwife, Mrs. Ellen Gogarty. It was also the local doctor¹s clinic and dispensary until it was closed in 1952. The clinic¹s original wall sign still exists today. The building later became the post office.

This hall was originally a small cottage. Its history as village hall first began with the removal of the interior wall in the 1960¹s. Some years later, it was greatly enlarged thanks to the efforts of a voluntary labour force, and particularly the efforts of the local families Sheridan, Lynch, and Govern. The hall owes its current state of excellent condition largely to the commitment of local organisations and lottery funding.

Credit Union
This building was the Church of Ireland from 1819 to 1994, when it was deconsecrated by the Bishop of Meath and Kildare, the Most Reverend Walter Empey. It is now a very successful credit union. The original church bell is still operational and was rung together with the Roman Catholic Church's bell to bring in the new millennium.

On the 23rd of January 1921, this bridge was the scene of the Battle of Salford, which saw the local branch of the IRA under the command of Pat Reilly fight a gun battle with the Black and Tans. The IRA unit won the battle and prevented the Tans from seizing a cache of gelignite which was hidden in a house down the lane alongside the Salford River.

A castle once stood on top of the hill to your right where there is currently a wooded area. The castle was called Garryard in Irish, Cathar Ard or High Seat. It was home to the Betagh Family, a well known historical family in County Meath with some descendants still alive in France today.

This building was once the Protestant school and was known locally as the Westland school. It was a single teacher school and served the community from 1906 until it was closed in 1967.

Hill of Homes
This field, known as Crochawella or Hill of Homes, displays evidence of medieval dwellings and a medieval roadway. Here stood a Norman tower house, with a bawn, cabins, and a mill, all of which were already in a state of ruins at the time of the Civil Survey in 1654.

In recent times, the remains of the fort here in Crochawella have been used as the dancing place at Moynalty's annual threshing day.