These works, part of the Navan Town Scheme (Navan 2030) which are being funded by the National Transport Authority, provide for improvements and enhancements to the appearance of the town and its public areas and improved access and movement in and out of the town centre.

Meath County Council has appointed a contractor for the upgrade works on Railway Street and Abbey Road in Navan, and the works have commenced. These works, part of the Navan Town Scheme (Navan 2030) which is being funded by the National Transport Authority, provides for improvements and enhancements to the appearance of the town, and its public areas and improved access and movement in and out of the town centre.

During the works, Railway Street is scheduled to reopen from 10.00 pm Sunday, the 25th of August to one-way traffic whilst the remainder of the works on the street are completed, such as new footpaths, public lighting upgrades, fibre broadband connections to properties etc. In particular, a single traffic lane will be in place on Railway Street, and both left and right turn traffic movements will be temporarily banned at the Brews Hill junction as outlined on the map below.

These works are anticipated to continue until the end of January next year. 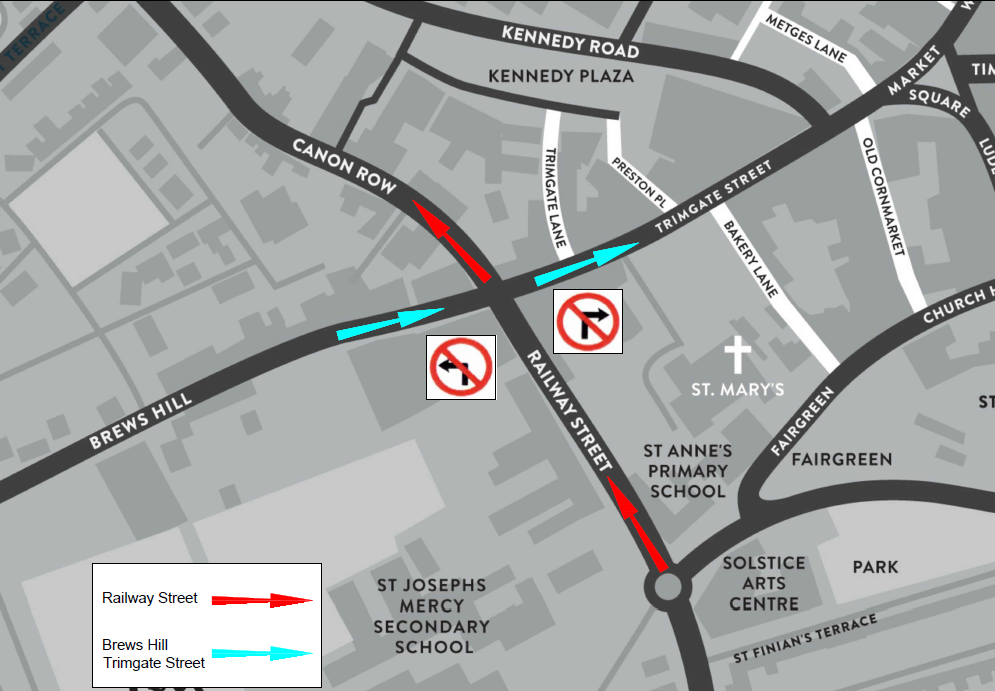 During the road closure, alternative traffic routes will be signposted and communicated via local media and social media. Access for residents and businesses will be maintained.Details of alternative routes and map.

In order to facilitate the planned traffic changes on Railway Street, and the future Navan 2030 works proposed for the Town, the bus stops at Market Square and the Mercy Bus Stop (temporarily located at Fairgreen) are to be relocated to a recently constructed bus stop and shelter on Abbey Road.

Meath County Council apologises in advance for any inconvenience, and thanks you for your patience while these important public transport changes are being implemented. 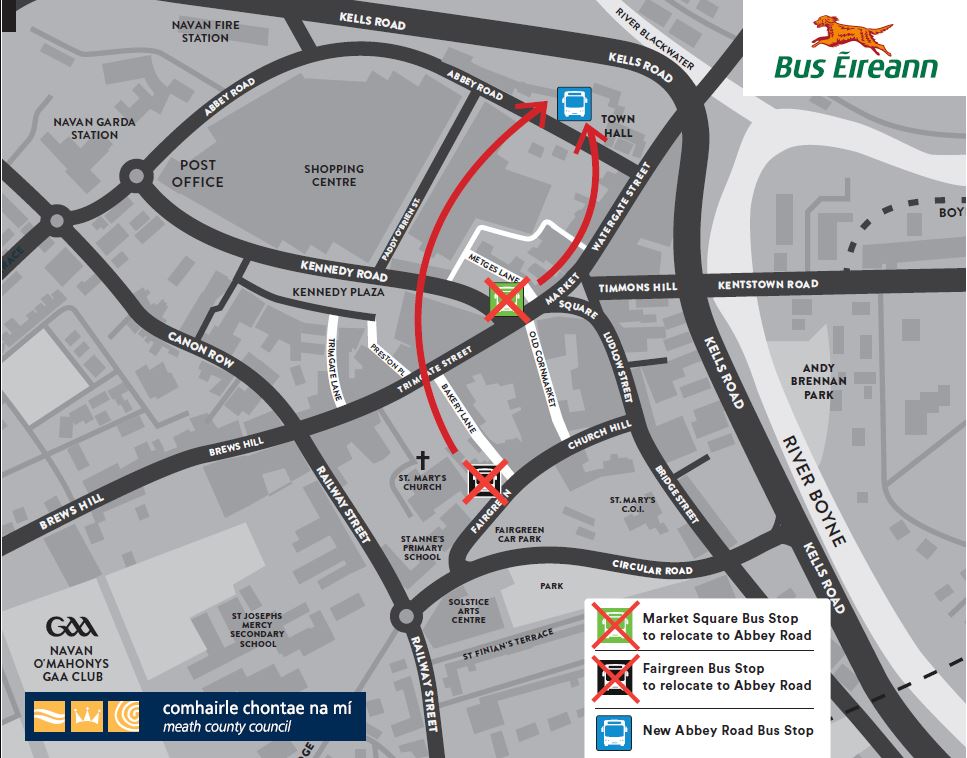 As part of the upcoming works, a new taxi rank with road, pavement and drainage improvements will also be developed shortly at the Abbey Road Entrance to Navan Shopping Centre following the completion of the current junction works at the Fire Station.

It is anticipated that there will be delays and disruption while works are ongoing. Meath County Council will work with the Contractor to minimise these as far as practicable. Meath County Council apologises in advance for any inconvenience, and thanks you for your patience while these important safety upgrades are being implemented.

Meath County Council CEO Jackie Maguire said; “The plans for Navan 2030 will rejuvenate the heart of Navan to deliver a revitalised and accessible town centre making Navan a better place to live, work and to visit. We will seek to minimise disruption as far as possible while we deliver the plan and we would like thank people in advance for their patience and cooperation during these works. Information on works and traffic management plans will be made available in local media and social media.”