According to the 'Book of Lismore', King Diarmait or Dermot, High King of Ireland granted to Columba the Dun or Fort of Kells to establish a Religious Community. The 'Annals of Ulster' for the year 804CE show that the Columban community on the island of Iona transferred to Kells which then became the principal Irish Columban monastery. In 918, the monastery was plundered and the Church destroyed. In 1117, the Abbot and Community were killed in a raid by Aedh Ua Ruairc. 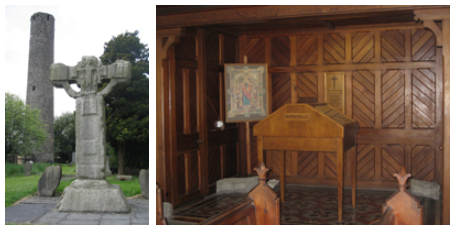 Following the Synod of Kells in 1152, Kells was granted Diocesan status and the old Church was elevated to the status of a Cathedral for the Diocese. In the early 13th. century the Diocese of Kells was absorbed into the newly created Diocese of Meath. Following the Reformation the Parish Church was in ruins. It was rebuilt in 1578 on the instructions of Hugh Brady, Bishop of Meath, the Archdeacon of Meath, who also held the position of Dean of Christ Church Cathedral, Dublin, Sir Thomas Garvie also assisted in the task of rebuilding the Church, as did Nicholas Daly, Sovereign of the Corporation of Kells.

The only remaining portion of the mediaeval Church still standing, is the bell tower. From surviving records we know that the old Church was a large cruciform structure with a chancel and tower. The present Church was built in 1778. The spire on the bell tower was erected by Thomas, 1st Earl of Bective, in 1783. It was designed by Thomas Cooley and the stone-cutter employed was John Walsh. The Graveyard gate piers were also built for the Earl of Bective in 1783. The Church was altered in 1811, and again, in 1858, when the interior was re-ordered. In more recent times the Church roof was restored in 1965 and the interior re-decorated. Also, in 1965, the old disused Gallery was converted to exhibition space and display panels, recording the history of the monastic site, were erected.Visitors are always welcome to attend any Services in the Church and Christians of all denominations are invited to receive the Sacrament of Holy Communion.