The Meath Gaeltacht consists of two adjacent villages of Ráth Chairn and Baile Ghib, which are located close to Navan town in the centre of County Meath. 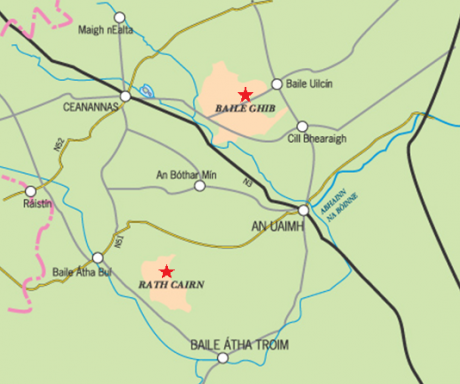 The Meath Gaeltacht is the smallest Gaeltacht area and consists of two adjacent villages of Ráth Chairn and Baile Ghib. It encompasses a geographical area of 44m2. This represents 1 per cent of total Gaeltacht land area.

In the 1930s in County Meath the Irish Land Commission undertook a remarkable social engineering project. Several large farms were acquired and tiny patches of the poorest land in the west of Ireland were exchanged for twenty-two acres of the best in the east. The government’s objectives were, firstly, to relieve congestion on the western seaboard, and secondly, to create an Irish-speaking microcosm in the Pale, 40 miles from Dublin, from which Irish would spread out and reverse the language’s centuries of decline.

In 1937, fifty households moved to Gibbstown. The Gibbstown immigrants came from Cork , Kerry, Mayo and Donegal.

When the Irish farmers returned to the land in Meath, they brought with them their native language and culture, which today is greatly celebrated in the small Gaeltacht of Baile Ghib and Ráth Cairn, 70km from Dublin city.