‘Points of Pride’ a walking tour of Navan designed to showcase the best of Navan’s heritage, with reference to the
town’s rich historical past and more recent developments. It is a celebration of the people, the architecture and the culture of Navan. 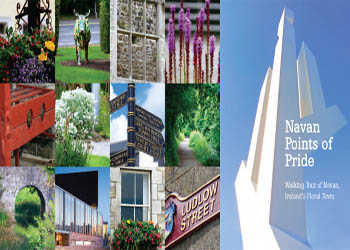 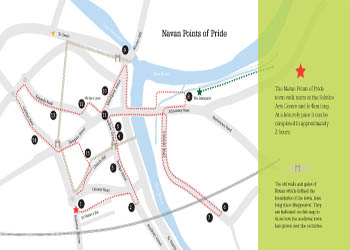 A Concise History of Navan
Navan, Ireland’s floral town, located in the heart of the Boyne Valley, is a vibrant business, shopping and tourist destination with plenty to interest the modern visitor. The name Navan comes from the Irish translation of ‘An Uaimh’ which means cave. The cave in question is located on the east bank of the Boyne at Athlumney and was discovered in 1849 during excavations for the extension of the railway line from Drogheda to Navan. Navan developed first as a market town and because it is a natural meeting point for North-South traffic. The town was utilised by the landed families of rural Meath although it did not benefit from any great patronage, as did the towns of Kells and Slane. The four principal estates in and around the town were owned by absentee landlords: the Duke of Bedford, the Earl of Essex,Lord Howth and Lord de Ros.

Navan was originally the point where travellers came to cross the Boyne and Blackwater rivers, at the ford of the Poolboy (from the Irish ‘Póll buí’ or ‘Yellow Hole’). Soon after the Norman conquest in 1170, Henry II granted the Kingdom of Meath to the Norman Hugh de Lacey, who in turn passed the Barony of Navan to Jocelyn de Angelo (later Nangle). De Angelo founded Navan town to encourage settlement and to create a centre for the exchange of goods, grain, linen, hides and wool for iron, salt and luxury goods such as wines and silk. He also founded an Augustinian Abbey dedicated to the Virgin in 1189, which was in ruins in 1641 and of which no trace remains today. The statue of the Blessed Virgin, which was housed in the monastery attracted large numbers of pilgrims during the Middle Ages.

The Navan Points of Pride town walk starts at the Solstice Arts Centre and is 4km long.
At a leisurely pace it can be completed in approximately 2 hours.

The old walls and gates of Navan which defined the boundaries of the town, have long since disappeared. They are indicated on this map to show how the medieval town has grown over the centuries. 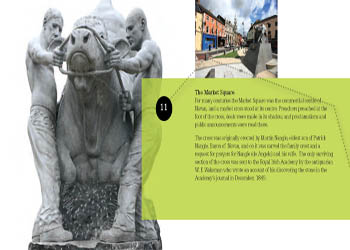 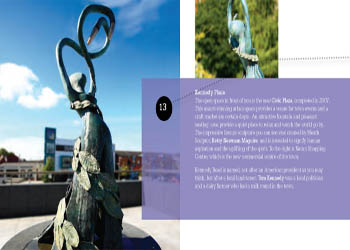